In the United States, domestic and family violence impacts an estimated ten million people each year. At the same time, 10% of Americans have had a substance abuse disorder at some point in their lives, according to the National Institute of Health.
There is a strong correlation between domestic violence and addiction. Substance use can be one of the things that facilitate domestic abuse, while abuse can be a contributing factor to addiction as well.

With October being Domestic Violence Awareness month, it’s important to acknowledge and be a voice for domestic violence survivors while learning about the correlation it has with substance abuse.

Domestic violence is present in every community, regardless of gender, age, race, sexual orientation, religion, socioeconomic status, or nationality. It can happen to anyone and is not bounded by demographic considerations.

According to the reports of the Arizona Coalition to End Sexual and Domestic Violence, one in ten men and one in four women will experience domestic violence at some point in their lives.

On an average day, 19,000 calls are placed to domestic violence hotlines nationwide.

There are many ways that domestic violence has significant impacts on its survivors. These include psychological trauma, physical injury, and even death.

At least 107 people were killed in homicides that were related to domestic violence in 2015 in the state of Arizona alone. In the United States as a whole, nearly 20 people every minute are being physically abused by a domestic partner. Across the country, 72% of all murder-suicides involve a domestic partner.

Intimate partner violence doesn’t just impact the victim but also can have a significant and traumatic effect on children in the family. According to the National Coalition Against Domestic Violence, one in fifteen children is exposed to domestic violence every year, and out of these children, 90% of them actually witness this violence.

What Is Domestic Violence?

Intimate partner violence can be perpetrated by either women or men. However, women make up the majority of victims. Also, women report that they experience more serious consequences of violence and more serious forms of violence than male victims. This leads to a heightened risk of developing substance use and mental health problems.

The rates of intimate partner violence around the world are quite alarming. As an example, it is estimated that more than 35% of women in the United States experience physical violence, rape, and/or stalking within the context of a domestic relationship at one point in their lifetime.

Physical violence is only one of the many types of domestic abuse. Abusive behavior can be broken down into many different categories, each of which can be accompanied by devastating consequences.

Sexual abuse in the case of domestic violence involves one partner forcing the other to take part in sexual acts without their consent.

This form of abuse can involve both physical and verbal behavior.

This type of abuse can be harder to spot because it isn’t physical. Emotional abuse involves exploiting another person’s insecurity, vulnerability, or character. This can include intimidation, brainwashing, manipulation, degradation, or control of an intimate partner.

This type of abuse involves playing “mind games,” causing fear by intimidation, or threatening physical harm. It can also consist of forcing an intimate partner to be isolated from work, school, family, and/or friends.

Stalking is a type of abuse that involves any pattern of behavior that is intended to harass, terrorize, or annoy the victim. This might take the form of unwelcome gifts or letters by mail, repeated telephone calls, or surveillance where the victim is known to frequent.

Knowing the Signs of Domestic Assault

It’s common to identify signs of domestic abuse, such as physical marks. However, other things are easier to overlook or explain away.

All people are affected by domestic abuse differently. The impact, though, is both physical and psychological. Usually, a person will realize that another might be the victim of domestic violence when noticing several related signs.

When a person is being physically abused, they will likely have physical injuries or frequent bruises that are consistent with being choked, knocked down, or punched. At the same time, they usually won’t have consistent or very strong explanations for where the injuries originated from.

The victim might try to cover these types of physical signs using clothing or makeup.

Domestic violence can also be very mentally damaging. Victims can feel despairing, hopeless, or helpless. They also might seem like they can’t ever relax, left in a constant state of alertness.

There are many other factors or conditions that could cause these symptoms, as with the signs of physical abuse. However, they are common among domestic violence victims who feel as though they are unable to escape their abusive relationship.

Abuse can cause a number of different behavioral changes. Someone who was once cheerful and outgoing, for instance, might become withdrawn and quiet over time. This could be a sign of domestic violence and abuse.

It is also common for people that are the victims of domestic abuse to seem nervous or anxious when they aren’t with the abusing partner. They also could seem like they have a lot of anxiety around pleasing their partner.

There are a number of risk factors that are linked to a greater likelihood of perpetrating domestic violence. While these might not be direct causes, they can be contributing factors. Being at risk does not necessarily mean that a person is involved in violence.

There are also a number of relationship, community, and societal factors that are risk factors for perpetrating domestic violence, according to the CDC.

Relationship factors can include economic stress, one partner controlling or dominating the relationship, or marital instability. Some of the community risk factors include poor neighborhood support and cohesion, high density of places that sell alcohol, and poverty and associated factors.

What Is Substance Abuse?

Substance abuse is defined as having a pattern of harmful use of any substance with the intention of altering one’s mood. The substance involved can be alcohol, legal drugs, or illegal drugs. While some people use substances without having substance use disorder or an addiction, others can suffer from serious consequences due to alcohol and drug use.

Substance use is said to cross the line into abuse if repeated use leads to significant impairment.

People are generally talking about the use of illegal drugs or alcohol when discussing substance abuse. These drugs can distort a person’s perception, cloud their judgment, or alter their reaction time. This can put people who suffer from addiction in danger of injury or an accident.

Other abused substances include prescription drugs, alcohol, inhalants and solvents, and over-the-counter medications.

Recovering from an addiction is always difficult, but some people might find it particularly so during the time of the pandemic. This article takes a look at how to keep recovery first in uncertain times. 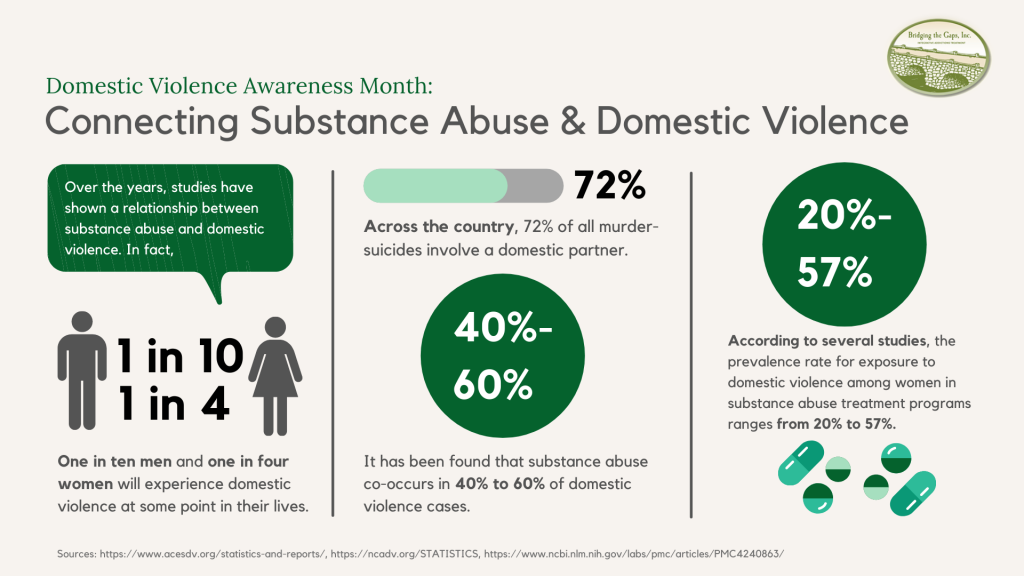 Domestic Violence and Substance Abuse: How They Are Connected

Both domestic violence and substance abuse are major public health concerns. According to the

American Society of Addiction Medicine, substance use and/or abuse can play a facilitative role in domestic violence by either exacerbating or precipitating violence. It has been found that substance abuse co-occurs in 40-60% of domestic violence cases.

While substance abuse can facilitate domestic violence, it can also result from domestic abuse. It has been identified, for example, that spousal abuse is a predictor of developing issues with addiction.

When a person is addicted to drugs, they are driven to seek out their substance of choice despite the potential consequences of their actions and behavior. This can lead addicts to act in violent, irrational, or controlling ways within their relationship with an intimate partner.

One study that looked at IPV in Iran found that the overall rate of violence among women with addicted spouses was significantly higher than those who had spouses without an addiction. This was particularly true if more than one type of substance was abused by the spouse.

When both parties have a substance abuse disorder, the risk of domestic violence increases. For victims that have an addiction and are under the influence to accurately determine how much danger they are in. They also will likely be less able to call for help and have a more difficult time defending themselves.

There is a vicious cycle that emerges when it comes to domestic abuse. The victim might fear that their partner will retaliate if they report the attack, whether that retaliation is physical, financial, or emotional.

There is also a well-documented link between domestic violence and mental health problems such as depression, general anxiety disorder, posttraumatic stress disorder, phobias, suicidality, and dysthymia.

According to a number of studies, the prevalence rate for exposure to domestic violence among women in substance abuse treatment programs ranges from 20% to 57%.

Recent studies have suggested that both of these propositions are true. This makes the relationship bidirectional and complex.

Being abused by an intimate partner can be an incredibly traumatic event, whether it happens once or as a part of a pattern. You can learn more about the relationship between trauma and addiction here.

The Health Consequences of Domestic Violence

According to a study, 56% of women who experience domestic violence are diagnosed with a psychiatric problem like depression while 57% met the criteria for PTSD.

When there is a co-occurrence of domestic abuse and substance abuse, it is necessary to find treatment for both. Across the country, there are treatment centers available that focus on helping both the victim and the abuser overcome their addictions and change their lives.

There are a number of different treatment options and resources available for survivors of domestic assault. These involve therapy, classes, shelters, and crisis phone numbers. Treatment might also be necessary for the mental and physical health consequences of domestic assault and abuse.

Self-care is a big part of recovering from both substance use disorder and being a victim of domestic violence. One of the healthy practices that are known to promote emotional health and reduce stress is meditation. You can learn more about the benefits of meditation for addiction here.

This Domestic Violence Awareness month, it’s important to understand the link between intimate partner violence and substance abuse. While the two can often go hand in hand, they also can stand on their own as severe issues require treatment.

At Bridging the Gaps, our integrative addiction treatment center focuses on providing comprehensive, compassionate, and quality care for adults that are suffering from substance use disorders. You can learn more about us here.